As you may know the MacBook Pro laptops are increasing in sales. Plus the stock of the Apple increased after the release of the iPhone. So it looks like 2007 will be a great year for Apple.

But you may still be wondering what's the big difference between a Mac and PC? In my opinion, PC’s are great for business, while Mac’s are awesome for creative types.  A lot of people are converting from PC to a Mac. I just purchased my first MacBook Pro 17” 100GB 7200rpm with Final Cut Pro right before Christmas.  That means I've been a Mac user for about a month, and in words of a cup size from Coldstone ice cream, I “love it.” This is the first installation of three articles detailing my experience in switching from a PC to a Mac.

How do they work?

Boot Camp partitions your hard drive, meaning your hard drive is divided in two. Lets say you have a 100GB hard drive and you partition it, you'll then have two 50GB hard drives. This way it's able to host the Windows OS on one side (50GB) and Mac OS on the other (50GB). Warning this only works with the Intel processor Mac’s. Check out this link for more requirements on Boot Camp and how to download it. Boot Camp gives you the option to switch back and forth from Windows XP OS and Mac OS. So you get enjoy the best of both worlds.

The newest product for a Mac is called Parallels.  This software was ranked as one of best in show at the recent Macworld Expo in San Francisco. Parallels allow you to run Linux and Windows on a Mac without having to switch back and forth. Therefore you don’t have to partition your hard drive like Boot Camp. You can open up Windows OS in your Mac OS and use them both at the same time. Check out the pic below! 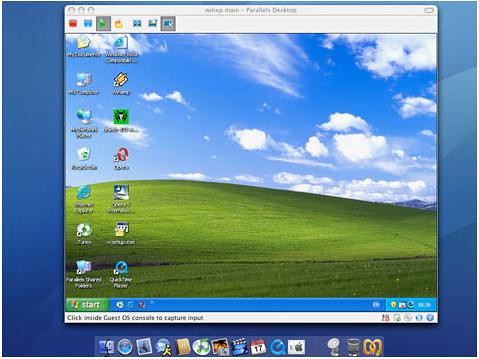 Parallels allow you to edit, drag, and drop files between both OS’s!!! Parallels is also Vista compatible. Something that will benefit those moving to Vista when the product ships in February. For more info, check out these two articles from CNN & Wired.

A friend of mine is a grad student in Library and Information Science at the University of Illinois.  She mentioned to me that her Graduate School is using Parallels for the “Learning Resource Center.” She also mentioned if you do use Parallels and Windows OS, you still have to buy anti-virus software for your Mac. Whereas the Mac OS is less likely to be hacked or to receive viruses.

I hope Part 1 of this article helps you understand that you don’t have to get rid of all your Windows knowledge. You can still use it on your Mac. Windows OS doesn’t allow you to use Mac OS on a PC. So with your Mac OS you can use Boot Camp or Parallels to integrate Windows OS onto your Mac computer. Stay tuned for part two where I will give you m ore tips on adapting to the Mac OS.

Contactboxes for those who hate cables