Samsung has released the first 10 megapixel phone for the Korean market.  We all knew it would happen, but had no idea who would be able to make it first and when it would be released.  You can probably grab one of these by ordering it over the internet but I'm unsure what services you could utilize it for after gaining ownership. 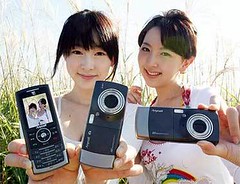 Samsung has made this model even slimmer than it's previous release of a 7 megapixel phone, just recently.  Other options on the phone, the ability to have television display over satellite service.  I like this much better than the streaming options available today.

Modeled as the SCH-B600 includes a 3x to 5x digital zoom along with many features most Samsung phones already boast.  Also included is an auto-focus and auto-flash feature combination.  This phone has more megapixels than my digital camera...I'm jealous!

With a 2.2 in. LCD that supports 16 million colors, Samsung always has a bright and clear display on both phones and MP3 players that I've seen.  They expect the phone to run around $900 so if you can't do without the features, start searching the net for some sellers.

Nick Wants To Thank You, No Really.