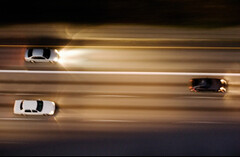 This might scare some of you, and it might make a few of you feel safer and more secure that you won't have to worry about a stolen car screaming by you, putting you or your family in harms way.  Police chases have always been a hot news item and a dramatic time for anyone near, but they might become a thing of the past.

A company called Eureka Aerospace has developed a microwave beam shooting device that can target cars from the air, stopping them by frying the electrical system.  The energy that the device generates is amplified by a generator is converted into microwave radiation.

The technology uses the same kind of energy used in microwave ovens,
but at a different frequency. Ovens typically operate at 2.45 Ghz,
whereas the high-power car-stopping system is at 300 megahertz. In both
cases, the radiation is above common radio frequencies and is not harmful to humans.

The device uses a special antenna to focus the radiation and aim it at cars in the most susceptible areas, disabling the electrical parts and making the car useless.  It has a 10 to 50 ft. range and is being tested for use by local police.  Hopefully you won't have any reason to find out if this actually works on a car you are behind the wheel of...

Zipit Wireless, Z2 is Out