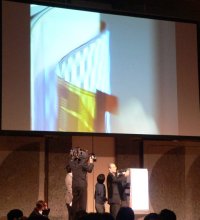 We all know that slim is in, but who would've though that a flat panel display could actually end up as thin as 1mm? This amazing feat of engineering was displayed at the recent CEATEC Japan 2007 show courtesy of Shinoda Plasma Corporation. The prototype uses an array of plasma "tubes" that are aligned between film electrodes, also enabling the display to be bent without suffering from any permanent damage. It is also capable of stitching small unit pieces to construct an even larger display should the need arise. No idea on when this technology will be released, but it will definitely cost a bomb then. Housewives would love this since you can't accumulate any dust on it.

Go for gold with Goldstriker