Home›Gizmos›Gaming›Silver PS2 On Its Way To USA

Silver PS2 On Its Way To USA

The lovely silver PS2 that has been over in Japan and Europe for some time now, since 2005, will be released to the United States shores by October 24th.  Finally some style and sleekness to the PS2 console. 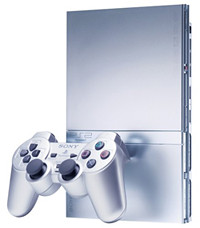 Pre-orders are rumored to be taken by Gamestop and other vendors for around $129.99 but the timing is odd.  The silver PS2 will be shipped three weeks prior to the long awaited release of the PS3.  With only the standard wires and one single controller, the silver PS2 might still hold some attention for a gamer that hasn't yet enjoyed the original PS2, but I feel a serious gamer will be waiting for the PS3 release.

Honestly, it probably will take some saving to get all the components if the PS3 is anything like the XBox releases I have seen.  The basic package is not enough...the accessories will steal your bank a bit.