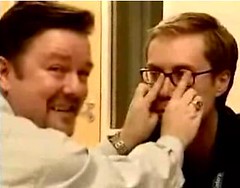 I like dry British humor, I do, but I don't get The Office, neither the British nor the American version, but despite my personal feelings both have taken off in their respective markets. In view of that success Microsoft UK asked Ricky Gervais and Stephen Merchant to make a training video that features Gervais's The Office character David Brent in a attempt to make a light hearted poke at the companies values and career development suggestions for employees.

If you decide that you must, you can check out the videos here @ I Watch Stuff!