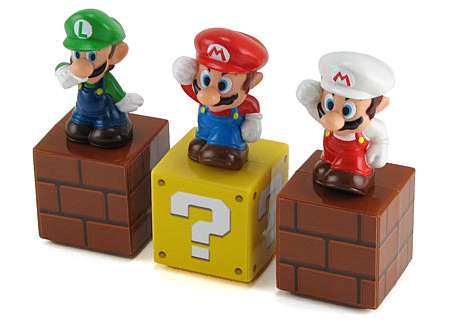 There is just something about this mustached rotund plumber and his brother from Italy who possess a worldwide appeal the world has never seen before in terms of video games. Mario and Luigi have appeared in countless adventures together, and most of the time they're doing their best to save a helpless Princess who seem to be surrounded by extremely lax security, getting kidnapped by Bowser and his cohorts each time. In their mission to rescue Princess Peach from the evil clutches of the reptilian Bowser, both Mario and Luigi have had the honor of knocking their thick skulls against randomly strewn blocks to obtain power ups that go a great length in aiding them along. Who can forget the sounds made each time these blocks are banged by the famous Mario Bros.?

ThinkGeek is now offering Super Mario Sound Blocks that feature sound samples taken directly from the game itself. All you need to do is push their heads and the accompanying sound will follow. You can choose from Mario, Fire Mario, and Luigi for $4.99 a pop. Although the characters might be different, all three of them feature a trio of sounds that are played randomly. You get the famous coin sound, jump, items emerging from a block sound. The fourth sound are exclusive to the character purchased - Mario, Fire Mario, and Luigi are bestowed with the power up sound, shooting a fireball sound, and the 1 Up sound (incidentally my favorite) respectively.